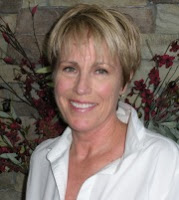 This week’s beauty is Lynne Spreen who is 56-years-old. Lynne is in the middle of writing her second book and also has a blog called Any Shiny Thing. She is a retired HR manager and a new grandmother. I love what she has to share about growing older.


I Refuse to Play
As older people, we know that looks shouldn’t matter, and yet they do. Dr. Vivian Diller calls this the beauty paradox in her book called Face It: What Women Really Feel When Their Looks Change. A few years ago, I paid a price for this confusion: I fell under the spell of a well-meaning aesthetician, a doctor of anesthesiology who had a beauty business on the side and gave me a free injection of Juvederm.
Why did I do it? I already have big lips, so I wasn’t trying to be Angelina Jolie, but I've got a couple of crevices around my mouth. The doctor said a collagen injection would smooth them out. The result?
I looked like Daisy Duck! I almost cried on the way out of the office. I had an appointment with my hair stylist after that and I could hardly speak clearly. Sitting in front of his mirror, I held a magazine in front of my mouth and mumbled my instructions. I was so humiliated.
The doctor had reassured me that the swelling would go down, and that turned out to be true, but it didn't happen quickly. For maybe four or five weeks I looked like a fish, and then after that, I looked like – well, not me. I hated the way I looked and felt, like a sellout. Like someone who was telling the world she didn’t value her inner worth, and would go to such extremes to try to meet our stupid, commercial definitions of “beauty.”
I have ranted on my own blog, Any Shiny Thing, about the way we older women sell ourselves short when we suffer to look younger, or bemoan the fact that we "can't compete" with younger women. Probably the reason I feel so strongly about this is because I tried it myself and felt so traumatized.
Every woman has to decide for herself how much beauty matters. I wear makeup and get my hair done, watch my figure and get mani/pedis. I want to look as good as I can, but here’s the difference: I am perfectly happy to look my age.
There was a line in an old movie, War Games, where the Pentagon's supercomputers launched world-annihilation simulations. At the end of the simulation, the frustrated bank of computers gave up and concluded that “the only way to win is not to play." That's my approach to trying to look younger. I can't and I won't try.


In the years since that debacle I have had two abdominal surgeries, the latter of which appeared to be (but wasn’t) ovarian cancer, a disease which killed two of my aunts. Getting ready for the surgery was sobering and sad, and it taught me something really important: that I didn’t care what I looked like as much as I cared about living! Just to be well and strong seems like such a gift, and it can’t hold a candle to a few canyons etched in my face.
I’ve never told anyone this story before, and I appreciate Louise and her blog, Lines of Beauty, for giving me a chance to talk about it in a constructive way.
Thank you Lynne.
louise@linesofbeauty.com Louise CF at 12:09 PM