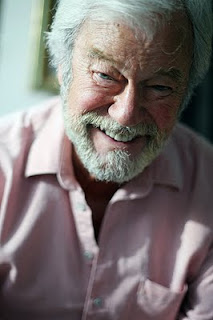 This week’s beauty is 81-year-old Canadian actor Gordon Pinsent. Being a keen admirer of older people, he caught my attention recently when I saw the movie Away From Her in which he played the loving husband to his wife (played by the beautifully aging Julie Christie) who is struggling with Alzheimer’s. One of my daughters thought the movie was depressing but I really enjoyed it because it was such a sweet, sweet love story and a beautiful moving tale that deals with memory and its sometimes circuitous, enigmatic path over the course of a long marriage. Away From Her came out in 2007 with good reviews and an Oscar nomination. I’m happy that I finally got to see it.

One of my favorite quotes from the movie was, "I'm thinking that sometimes you just have to make the decision to be happy. Just decide. Things aren't ever what you hoped they'd be. Not ever, for anybody. The only thing that separates one kind of person from another is there are some who stay angry about it and there are some who... accept what comes their way." ~ Olympia Dukakis, as Marian.

Pinsent says that "retirement is never a question. Retire from what?"

How many people get to say that?

Here the actor discusses the positive side of aging.

And P.S. maybe you and Betty White should have dinner? No?

louise@linesofbeauty.com Louise CF at 11:06 AM