Aging Gracefully in the Water 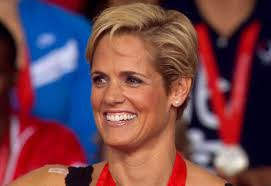 This week's beauty is Olympic swimmer Dara Torres who is 44-years-old. If I am able to really bust my ass and get strong enough and fast enough to cinch the national record for women ages 50-54 for the 50 freestyle, I am certain that Torres is going to come along and gobble it up with utmost ease when she turns 50.

So far Torres has swam in 5 Olympics and at the age of 41, was the oldest swimmer to ever earn a spot on the team. She is now training for 2012 in London.

Dara says that she is in far better shape in her 40s than she was in her 20s.

How does she do it?

She recently was quoted as saying that while her goals may be very different from other people, the need for drive, will-power, and support are still the same.

She also says that finding what motivates us is important, whether it’s watching the number on a scale or seeing the difference in how our clothes fit.

It’s also easier to find motivation if we know when we’re more likely to stick with a fitness routine, she explained. She is more of a morning person. Doing her workout first thing helps her to feel revived and gets her day going.

She says that recovery and rest are important. She trains five days a week and rests on the weekends.

And she allows herself to splurge once in awhile because she believes if we're so restrictive we’ll just crave something and eat more than we actually want to. So if we don’t overindulge, she says, a little splurge is fine.

When asked recently if she has ever overindulged and consumed as many calories as fellow Olympic swimmer Michael Phelps, whose diet made a big splash during the 2008 games in Beijing, she laughed and said: “I’ve had a few meals with Phelps and let’s just say I could keep up.”

Dara also has a book out. I haven't read it yet, but it's on my stack.