My mama turned 96 yesterday. She has also remarkably, and very gratefully, turned a corner within her dementia, to a much happier place, as of late.

The last 10 months have been a harrowing experience for her and for me, as she further lost her memory and slipped into acute paranoia, calling me sometimes several times a day, in utter panic about not just the safety of her own life but for her loved ones as well.

This is a woman who had, until then, lived a life of balance and happiness. A woman who raised five children and had a long, loving, 58-year marriage to my Dad. She is also a woman, who grew up with a bi-polar mother and never really processed how that affected her. As my mom's dementia settled in, so did her fears that she was becoming her mom. The underbelly of what showed up was her trepidation of what people thought of her, something that she no doubt worried about since childhood but kept under wraps, until she could no longer.

Three things came to her rescue this past year: Medication (although it took awhile to get it right), her willingness to seek counseling, at the ripe old age of 95, and her red plaid blankets.

The Christmas before last, she purchased an innumerable collection of red plaid fleece blankets to give as gifts. The multiple purchases were also coupled with confusion, of how many she had bought and who she had already given them to (par for the course at 94...or even at age 55, as I was having a hard time keeping track). My initial thought about the blankets was, that although they were very synthetically luxurious, they were a far cry from the wool blankets that I grew up with and loved. I thought they were kind of icky. To her however, they were a heavenly comfort, better than a stuffed teddy bear. She kept two for herself (as you can see in the photo below) and they became the security blanket that helped usher her over the hump, of losing her mind.

In recent months she has lovingly referred to them as "My reds". On the worst of her days, I came to her rescue. Equipped with vanilla ice cream, I would wrap her in her reds, sing to her and hold her, reaching for solace, to appease not only her, but myself. It is only now that I can look back in reflection, through my tears, and begin to see the subtle beauty of those moments. 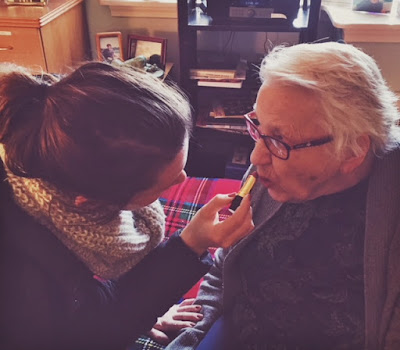 One of things that has helped me to cope, the past several cold winter months, is the same thing that has helped her. At night, in an effort to bring myself comfort and sleep, I wrap my body in my own red, before pulling the duvet over my shoulders. Wrapped in this little cocoon of coziness, I've been sleeping very deeply on many nights, like a relatively content, newborn woman.

At the same time, my youngest daughter has been there for me through my struggle and her own, whilst wrapped in her own cocoon of coziness too. <3
louise@linesofbeauty.com Louise CF at 1:42 PM