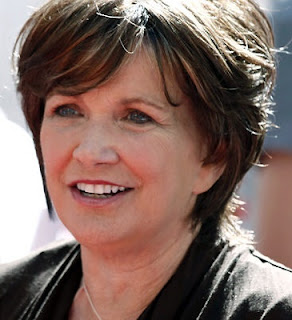 This week's beauty is Elizabeth Edwards who died of cancer on Tuesday. Like some of you maybe, I've been thinking about her a lot.

This year she not only faced the fight of her life health-wise, but she did it while her marriage dissolved after confirming that her husband fathered a child with another women while she went to battle for him to win the 2008 presidency- knowing that her cancer had come out of remission.

Good lord! Forgiving a partner for infidelity must be hard enough, but going to bat for them in a presidential election when you are sick & he is cheating on you? Unforgivable.

I didn't know it then, but Elizabeth was the best thing John Edwards had going for him in that election. The selfish little schmuck.

Anyway,  I applaud Elizabeth not just for her resiliency in dealing with such a private matter in the public eye while being so sick, but for all the wonderful things I have read about her in addition to the fact that she was a great civil rights activist.

The above photo of Elizabeth, with her great new sassy haircut, was taken in September 2010 at a Stand Up 2 Cancer event where they interviewed her about her battle with cancer.
louise@linesofbeauty.com Louise CF at 10:26 AM