A River Runs Through It

I finally decided at the end of packing up my childhood home that what I would really miss, the very most, is the view. 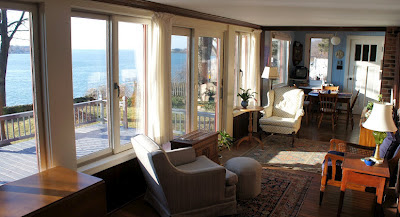 Over the last several decades when I've needed a vision of something to calm me- sitting in the back yard, and looking out over the water is where I have frequently traveled to in my mind.

Although the house is gone now, I will have this vision to go to, forever.

Our river house was built in 1890 and was a former tea house back in the day.

I don't even know where to begin to tell you about the house but to say that it touched every one of my senses.

It is where I've experienced some of the scariest moments in life, when strong electrical storms rolled in off Lake Ontario. Driving wind and rain would shake the house, and rattle the windows so violently, that I could not believe afterward that we had made it through another storm unscathed, yet again.


One night, while visiting my folks alone as a grown woman and mother of two, I was so frightened during such a storm in the middle of the night that I rapped on my parent's bedroom door and asked if I could get in bed with them.

"I don't know how you can stand this year after year," I said trembling.

There were other sounds the house made however that were pleasing. Like the sound of the sliding screen door when it opened and closed in the summer, and the gentle clanging of halyards on sailboat masts, heard in the quiet of the night.

And, in particular, there was the sound of my dad's voice when he would say to my mom, with such satisfaction, "Mary just look at all these grandkids," or his oohs and ahhs from the aroma, and taste, of her homemade rhubarb pie.

Beauty was everywhere there. It wasn't just the water scape but also the textiles, artwork, and the treasures handed down through generations.


The river house, for me, was partly a lesson in the simplicity of living.

I keenly observed my depression-era parents after my four, much older, siblings went off into the world. Finally they had time to explore other things in life, like drawing and painting, bread making, gardening, and music.

With the somewhat tumultuous 60s, and paying for college tuition almost behind them, they could finally relax and drift, a bit.

And now here I sit with our youngest about to go off into the world herself. It seems crazy that this time has come so soon. How quickly children grew up. I wish I knew this before, but like many things in life, it isn't something that we can know until we live it.

Kind of like how quickly we all grow older, too.


Photos by KC Kratt.
louise@linesofbeauty.com Louise CF at 9:44 AM