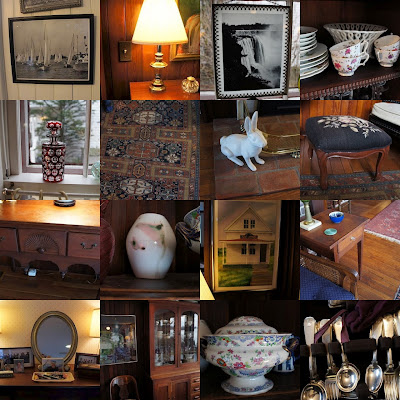 Before I left to clean out my childhood home with my four siblings, I emailed them a link to the post below with my thoughts about what we were about to embark on. It was, maybe for all of us, a lesson in the power of intention.

After we gathered, my sister suggested that we remain civil during the divide- that we wouldn't interrupt each other or yell. That we would come out as a family in one piece. This set the ground rules for the week.

Still, when joining together, we were all at a loss as to how to go about dividing up a household between siblings. Just how and where do we begin? Do we start choosing oldest to youngest? Do we pull straws? Do we have a pseudo auction? Everything I read on the web just seemed confusing.

Then my middle brother suggested that we simply start by writing on a small piece of paper what each of us most desired from the house and put the paper face down in a tray, with our name on it. When there was a tie between two people, the person who acquiesced, got to immediately pick two more items from the house, and sat out the next round of bidding.

If neither of the two siblings in the tie wanted to acquiesce, we flipped a coin.

So even if you lost, you still won.

This bidding process went on, round after round, for two and a half days, and worked beautifully.

And my mom was so relieved to hear that her family had not killed each other!

At about the 3rd round of bidding I decided to text Tom and our two daughters to see if there was anything they desired from the house.

Tom, who was in the middle of his work day, texted back "Just you."

My eighteen year old daughter texted back "Nothing."

But my twenty-one year old daughter had specific ideas :-)  I had someone on board with me for the bidding, which made it so much more fun.

At this, I decided to send her a link to the heirloom photos that had been taken a few months ago and it became a game. I would text her and say "We lost out on the dining room table but we got the dresser that you love!"

I'll tell you though- by day three I was reeaaally tired of choosing. Plus, behind all the fun of choosing, was the sadness of seeing our home unravel.

We rallied together though and after each long day of dividing, packing, and organizing, the five of us jumped into the river, or in the pool at the park nearby, and then headed out to dinner.

I had a martini with 3 olives in it every night.


It was really fun for the five of us to be together without any spouses or children.

For me, it was epic.

In the end though, the week reminded me of the week my dad died eleven years ago.

There was the sweetness, love, and support of being together, the sadness, and the celebration of someone/something.

And both times, there was the knowledge that we had lost, or were about to lose, something very, very dear to all of us.