Turning the Boat Around 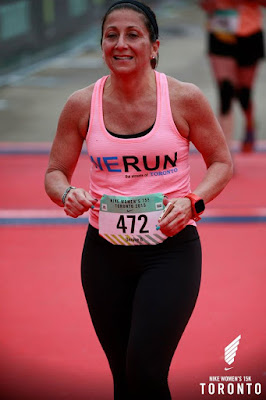 I’ve wanted to share a story for a while about Denise Donnarumma and her journey back to health.

Denise is 55 and we were colleagues together for ten years at Susan Bristol Inc, a traditional sportswear company in Boston.

As Denise explains, her petite frame weighed about 103 pounds in high school but over the years she became more sedentary and ballooned up to 186 lbs. with her love of fast food, carbs and sugar. As I once was, Denise was also an emotional eater.

Growing up relatively thin, she had now become the heaviest of her four siblings. Denise carried her extra weight mostly in her hips and felt uncomfortable in her own skin. She had difficulty purchasing well- fitting clothing, traveling on airplanes and enjoying sporting events because of her discomfort in the seats.

Eventually, she was diagnosed with high cholesterol and had to go on medication. Denise’s exercise efforts had not been enough to keep her at a healthy weight. Bad habits coupled with watching both her parents suffer from artery disease and her dad dying at age 75, from poor self-care, encouraged her to turn her boat around. 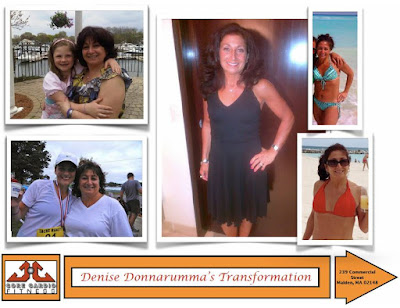 As she says, “I wanted to take control of my health after watching my parents not live a good quality of life in their retirement years because they didn’t follow proper diet and activity.” Her parents suffered with chronic health issues and frequent hospital stays. Denise wanted to enjoy her retirement years.

So in January 2011, she joined Core Cardio Fitness in Malden, Massachusetts. She met with a fitness coach who reviewed her fitness goals. Denise discussed her activities and eating habits. She was provided with a nutritional plan along with a weekly exercise routine to follow until she reached her goal to lose 56 lbs. Her workouts included indoor cycling, TRX (total body resistance exercise), kickboxing, Zumba, and yoga. She began to lose the weight steadily and at a healthy rate. Then Denise added running to her workout routine and completed her first 5K road race at 150 lbs. Within 9 months Denise reached her goal weight of 130 lbs., became a lifetime member of Weight Watchers and continued to compete in 5K and 10K road races finishing in the top 3 of her 50+ age group. By 2013 she was able to run and complete two half-marathons.

I was interested however to learn how her life has changed in other ways as well.

For starters, Denise said she feels better in her fifties than she ever did in her thirties. She has amazing strength and energy. She also loves the social camaraderie at Core Cardio Fitness that has helped her become a health and fitness enthusiast. Within a year of her success, Denise has become a qualified TRX instructor there. She is an inspiration to so many people as she is able to share her personal success story.

The other great news is that she is off her meds!

Thanks Denise for sharing your story. You are such an inspiration and I have loved watching your transformation back to good health.

Email ThisBlogThis!Share to TwitterShare to FacebookShare to Pinterest
Topics Aging Gracefully, Beauty of the Week, Do What You Love, Health Tips, The Conversation is Changing, Various and Sundry, Words of Wisdom
Newer Post Older Post Home