Allowing Nature to Take its Course 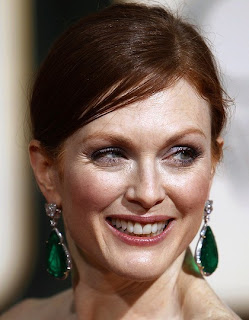 This week's beauty is actress Julianne Moore who is 50. Every now and then I like to feature a celebrity who is aging naturally and give them the thumbs-up for setting such a public example for all of us of what it looks like to age without erasing our face.

Plus, Julianne's comedy "Crazy, Stupid, Love", in which she plays Steve Carell's wife (from the Office), is opening in theaters next Friday. Hopefully it will get good reviews as I 'm looking forward to seeing it.

Julianne has said she has no plans to undergo cosmetic surgery. She prefers to age naturally and allow nature to take its course. That's my girl!

Recently she was interviewed in Health Magazine and had this to say about aging:

louise@linesofbeauty.com Louise CF at 11:18 AM