Aging Gracefully with Her Paintbrush 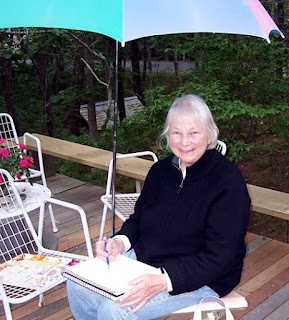 This week's beauty is Marilyn Smith Rosenfeld. Marilyn is the mother of Liz Smith who was a recent Beauty of the Week here on Lines of Beauty. It is easy to see where Liz got her artistic talents from. Marilyn and Liz seem to be yet another example of the apple not falling far from the tree.

I am happy to bring you Marilyn's story:

"Old age caught me by surprise. I am 77, will be 78 in April, still do not feel old, but I have begun reading the newsletter from the Senior Center with more attention.

About 15 years ago, I was in the supermarket when an older gentleman called out in passing, "Wednesdays are Senior Citizen discount days, pass it on!"  I thought, "Why is he telling this to me?"

I have never dyed my hair, never had cosmetic surgery. I had planned to accept old age when it got here, but not worry about it.

Old age was a time way in the future. 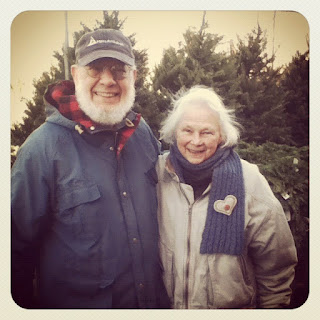 Three years ago, my husband suggested we go to the Senior Center to join a French Conversation group. I said, "Surely we are not that old yet."

We did join the group, and met several remarkable people all over 70, some in their eighties.

We met Anne, who is 81 and dances the Tango every night until the early morning hours.

We met Walter Ford Carter who wrote No Greater Love, No greater Sacrifice, about his father's death as an American army surgeon in the Normandy Invasion during WWll.  He goes to France each summer to lead tours of the Normandy beaches.

We met Ilse, who, as a Jewish teenager exiled from Germany to France during WWll, barely escaped being deported by the Nazis, chronicled in Once They Had a Country, Two Teenage Refugees in the Second World War by her daughter Muriel Gillick. 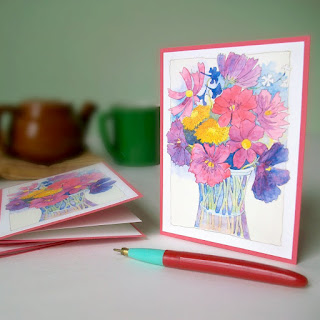 I have always been an artist. Since 1984 I have been a watercolor painter. I keep a drawing journal and draw what I see wherever I happen to be.

My daughter Liz, the youngest of our 4 children, and the creator of Made In Lowell, had the delightful idea of scanning my drawings, printing them out, and making notecards which she sells online and also in her studio. My husband and I love to go to Open Studios at Western Avenue Studios the first Saturday of each month, visit with Liz, and be introduced as "My mom who does the drawings on the cards." So satisfying!

I am so lucky to be able to draw and paint something I can do as long as I can hold a pen and brush.

Our children bought us a computer seven years ago for our 50th wedding anniversary.
I love the computer. I write emails, look at stuff online, and find all sorts of information on Google. This has kept me feeling young more than anything else.

Over the years I have been friends with several older women who lived into their nineties. They were all vigorous, creative, intelligent and active. I loved, admired and respected them, and have been inspired by them to keep drawing and painting, keep learning, keep moving, keep going. "

Marilyn thank you for being this week's beauty. As I told Liz I love your story and I'm always so happy to feature women with more experience with growing older :-)

louise@linesofbeauty.com Louise CF at 10:07 AM