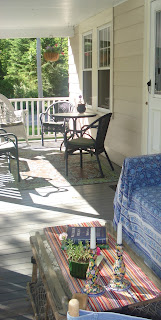 The other day I was looking through old photos and came across this one. Several years ago a scout from Country Living magazine came into my booth at The SoWa Market in Boston. I was doing my felted wool line in full force back then and she said she might like to feature me in an upcoming issue.

After touching base later that week the scout said she was still considering me and asked if I could send her photos of our home.

But in my mind it was shear panic as our house was undergoing a major construction project. Most of our lawn was ripped out, we had temporary walls up, everything was in disarray. And there was dust everywhere.

So I spent the next two days in the summer heat taking photos, amidst the plaster and chaos. Vacuuming, dusting, primping, creating little visual vignettes. It was crazy. It was fun, but a lot of work. 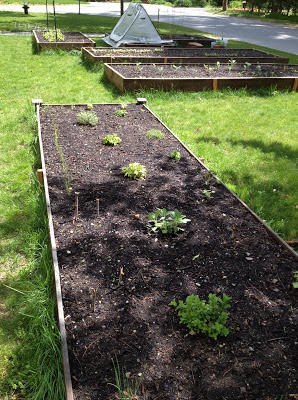 I emailed her all the photos and a few days later she contacted me, apologizing, because she had lost her job. She said that all the info she had gathered on me would go into the "felted wool file" at the magazine but she couldn't make any promises about what would happen next.

Someone did eventually call me from the magazine to feature my line at the Country Living Fair but I never did make it into the magazine.

Maybe my house wasn't "country living" enough for them.

Oh well, I like the photos I took and I'll enjoy reminiscing with them again when I'm an old lady perhaps.

On a more inspiring note, Mr. Fix-it and my older daughter recently built five raised garden beds and she has been hard at work planting organic veggies and herbs that she raised from seed, which is exciting.

My hope is that her bounty will be big enough that we can set up a little self-serve farm stand and send the proceeds to Safe Passage, the school in Guatemala where our youngest interned this year.

This is jumping the gun, but maybe we'll even name the farm "Safe Passage Farm" partly because the produce will have had an organic, safe passage themselves. I feel the liberty to say this only because she is leaving me to babysit "the farm" while she does an internship this summer in California!

I hope you're all enjoying the spring.