The last few weeks I've been posting to you from Madeira Island, Portugal where we spent the holidays in the homeland with Mr. Fix-It's entire family.

My father-in-law is from Madeira and 18 of us flew together to visit him and his Madeiran wife, who live out in the country. It was a long anticipated, epic event, to say the least.

...you can imagine how each day was an logistical exercise in patience. It all worked out however and was a great celebration together. 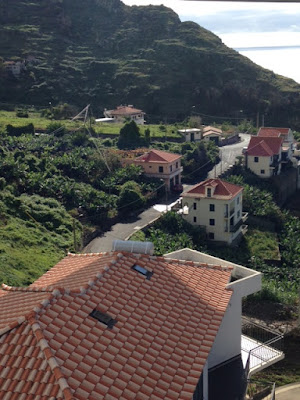 After the first week, because of the complexities of traveling with 20 relatives, I realized that I had had very few conversations of substance with anyone but myself! This changed however as we conquered the jet lag, the barking dogs, clucking chickens and settled into a groove with each other.

The bulk of us stayed at this spacious, awesome villa in the city for only $17 a night per person. This coupled with delicious $1.75 bottles of  Portuguese wine, and many rounds of card games, wove us tightly together in a way that we had never experienced before. I so love this family that I married into.

Described as "The Pearl of the Atlantic," Madeira was recently nominated by the National Geographic Channel as the best island destination in the world and it is understandable why.

I've posted about Madeira before here and here if you would like to see more photos and learn more about her majesty.

Email ThisBlogThis!Share to TwitterShare to FacebookShare to Pinterest
Topics Aging Gracefully, Do What You Love, Humor, The Conversation is Changing, Travel, Various and Sundry
Newer Post Older Post Home