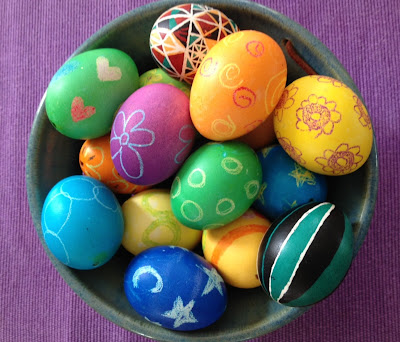 I thought I'd get this post out today in case you might like to play an April Fool's joke on someone and you can plan appropriately :-)

Sometimes the success of a good joke is starting early- warming up the receiver of the joke and getting them "on board", so to speak. A good example of this is the April Fool's joke that Tom played on me several years ago. It went off without a hitch, partly because I am so gullible. It still makes me laugh.

On a less humorous note, I've been feeling creaky this week with a sore lower back from moving furniture around, a sore knee, and even some carpel tunnel symptoms again. My body has clearly been talking to me.

I was reminded at an entrepreneur's seminar recently that it takes 21 days to break a bad habit. I am now on day #6 of easing off on sugar consumption and feeling much better. Sugar is a prime culprit in causing inflammation, which in turn causes body aches among other nasty things. The more we eat sugar the more we crave it. The key with me is not to eliminate it entirely but to eat it in small amounts, as it is clearly one of the worst things we can put in our bodies.

I wrote about this in my post The Sweet Stuff .

I apologize if I sound like a broken record!

Also, I am half-thinking about changing my tagline for the blog to "Aging authentically....." instead of the current "Aging gracefully....." and would love any feedback on this should you like to share it.

Lastly, I haven't started doing Pinterest yet but I like the concept and especially what so many women are pinning on the beauty of aging.

It's one of those things I think I SHOULD do for Lines of Beauty, but haven't gotten around to yet, but it's on my list and I think will be easier and more fun now that I have the App.

With this I leave you with one of my favorites.

Oh yes, and one more thing from my ninety-one year old mother:

"It's good to start each day with two glasses of water." :-)